So, you think you are smart, huh?

That’s the kind of feeling you get when someone can’t stop blabbering about petty little things, right? Mostly, people who think they are over smart fail to differentiate between simple things that you come across in everyday life.

What about you? Do you know the difference between a shrimp or lobster? Or how about yogurt and curd? Here are 15 such common things which confuses the hell out of everyone- The main difference between these two beasts is that the shape of their snout is different. Alligators have wider, U-shaped snouts, while crocodile front ends are more pointed and V-shaped. Also, when their snouts are shut, crocodiles look flash a toothy grin. But when alligators shut their snouts, you can’t see any of their teeth. A lobster tends to be rather big in size, growing up to fifty centimeters long whereas the maximum length of a shrimp would be around twenty centimeters long. Lobsters, on the other hand, have claws but shrimp doesn’t.

Also Read: 20 Types Of Bread From Different Parts Of The World They both have long ears and long legs, but just like sheep and goats, they both are different species. The biggest difference between two is that rabbits are social while hare doesn’t usually like to spend time with humans. Mayonnaise is made with the help of egg, vinegar and vegetable oil, these aren’t eggless while the sour milk is made from cow milk using the souring (curding) process of the milk. Both are used as salad dressing.

Did You Read: 20 Types Of Bread From Different Parts Of The World Panner is a dairy product made with cow milk, while tofu is a soy product. Certainly, panner offers more calories and more protein but if you are trying to lose your weight tofu is best for you. 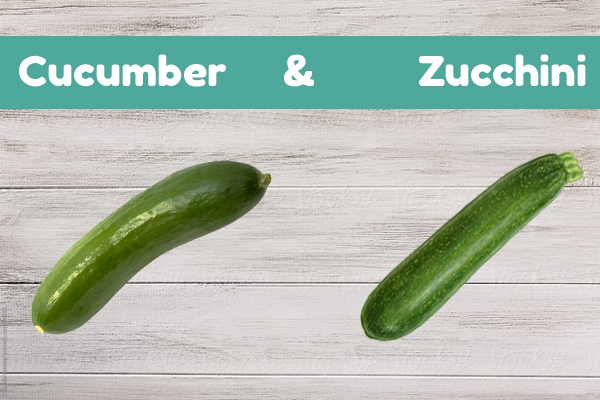 When placed side by side in a vegetable market, one can find it really hard to differentiate. But on touch, cucumber feels cool and waxy while zucchini feels dry and rough. Their taste is also different, cucumber tastes fresh while zucchini can taste bitter sometimes. Many people think both cupcakes and muffins are the same things but the difference comes with the icing. The cream goes on top of a cupcake but muffins don’t have icing at all. Also, you need cake flour to make cupcakes while you can use all-purpose flour to make muffins. Both of these big wild cats can have the same color of fur and an almost identical pattern but they are different. Leopards are smaller in size when compared to a Jaguars. Also, Jaguars like to spend time in water while Leopards absolutely hater water. Though they both know how to swim.

Also Read: Bananas Come In 14 Different Colors And Sizes, Did You Know That? Just because they both can sting pretty badly, people don’t really know the difference between a wasp and a bee. Bees are usually calm and only attack when provoked while wasps are naturally aggressive. Other than that bee have a furry body while wasps have a slim and smooth body. Many people think Curd is called yogurt in America and both are the same. But in reality, these two are completely different dairy products. To make curd we use the curdling process while adding lactic acid to the milk. While to make yogurt you need to use the fermentation process. Mules are calmer than donkeys and can work under high-pressure situations as well. Many believe mules are smarter than donkeys so don’t you dare call them the same animal. But unfortunately, a mule cannot reproduce, while a donkey can enjoy the experience of reproduction. Oatmeals are made with the porridge that’s why many people think they both are the same. But this is not the truth, porridge is a hot cereal, it can include a variety of grains, vegetables or even some legumes. Dates and prunes both look same in their dried state. Though dates are sweeter than prunes, sometimes too sweet to eat alone. Also, dates are ready to eat in both dried and fresh state, while you can only find prunes in a dried state. Flat leaf parsley is often confused by cilantro in the kitchen as both of them are used for the dressing and seasoning of the salad. But one can differentiate between the two with their smell as cilantro has the strong flavor and smell when compared to the parsley.

So, next time when someone is trying to be over smart, you know what question you need to ask. After all, many people still don’t know these tiny difference between such similar looking items and animals. Take my advise and learn it by heart, who knows when this knowledge might come handy for you.

Maybe you can use it to impress a girl or shut off a chatter-box who’s frying your brains, your choice!