Caution: Read at your own risk. Don’t blame us for scarring your sweet image of this supposedly adorable creature.

Be ready to be blown out of your mind with these uncanny facts we are about to share with you.

Ever thought a cute, cuddly creature like a dolphin could have deep water-buried dark secrets?

These facts we are about to present will change your perception of this intelligent, friendly and human’s best friend creature at sea.

Let’s take it from least scary facts about dolphins to the scariest ones:

1) Your sweet little buddy is actually a Mega-predator

We know there is no existent term like mega-predator, but what these sea mammals do falls into one such category. Apparently, they eat an insane amount of fish, squids, and shrimps.  They weigh around 260 lbs but eat more than 33lbs a day. That is a diet of a sumo-wrestler in humans.

Their hunts are organized and they attack in groups. They circle a small heard of fish into a corner and then grab them. They have their own territory like wolves and have an organized hierarchy within the group. They split into several groups for various purposes like attacking other groups of dolphins and steal their females.

Ever thought the charming thing can be so thoughtful and organized? Just like a political party.

3) This is the most dangerous dolphin at the sea The insane killing machine, the most dangerous predator at the sea and misidentified as a Killer whale, this monster is actually a species of dolphin. These killer whales have beastly muscle, with a mix of intelligence of a dolphin and that is why humans have been identifying ways to train them.

They eat almost everything at the sea including white sharks and giant octopus.

4) Their penis is not only for the mating purpose

It accomplishes the task of a hand as well. Doing multiple things with it, like, touching and feeling things. A lot of times they have been seen doing nasty stuff to inanimate objects including trying to force themselves on humans. 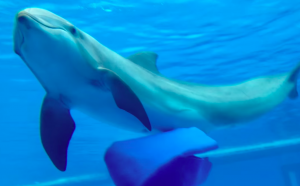 5) They can stay up for five days straight

They have an amazing ability to stay awake straight up to five days without any loss of mental ability or physical stamina. And they don’t have to make up for the lost sleep either. They have two halves of the brain which can sleep in shifts and the rest of the part can stay awake with an eye open. They stay alert of predators without losing too much of a proper sleep.

6) Dolphins are the rape predators

They even spank her and make scary noises to keep her scared and in line. And if she tries to swim away they are ready to bring her back by chasing her as far as possible. Feeling tarnished for life? Me too. If the above fact didn’t give you a nightmare, this certainly will. Dolphins are sexually very aggressive and have attacked human divers several times. Men, women equally. Actress Demi Moore was once visiting a dolphin habitat when a male dolphin took a serious liking to her.  Onlookers have confirmed the bizarre incident.

Have You Imagined: What If Dinosaurs Were Still Alive 9) Dolphins are not only rapists but murderers too

Now, this tests my limits. They have a murdering streak in their body, resulting in killing baby porpoises. Baby porpoises with horrific internal injuries were found washed up in the beaches of Scotland. At first researchers thought, they were killed because of some weapon testing but later they found tooth marks which belonged to dolphins.

Apparently, these murdering predators on a killing spree, using echolocation locate vital parts of babies and aim at them. They even pummel them and throw them around until they are dead. All this has been filmed underwater.

10) Dolphins kill their own babies

Male dolphins kill their own babies to mate with their mother. Like lions, it is believed that female dolphins become ready for mating if the babies get killed. This killing streak is mostly found in American and Scottish dolphins.

If you have read the article till the end, I am sure I have completely changed your outlook towards these so-called adorable creatures. Some of you might even be feeling outraged.

Sorry for erasing the pretty picture of a little dolphin you had in your room during your childhood, but the facts are facts and since they are animals, it is expected out of them.

It is their nature to behave the way they do, not something they do deliberately unlike humans.

Barbaric Ancient Punishments That Can Scare The Shit Out Of You

A Sweet Gesture Of Peace From Pakistan